The century-old Van Briggle Pottery Company building is located southeast of the intersection of West Uintah Street and Glen Avenue in Colorado Springs, Colorado.2 From 1908 to 1968, the building operated as a pottery factory producing thousands of ceramic art and architectural pieces. The building faces south and is situated a short distance from the west bank of Monument Creek, adjacent to National Register-listed Monument Valley Park, a narrow designed landscape traversing the central part of the city presented to the citizens of Colorado Springs in 1907 by its founder, William Jackson Palmer. The pottery company site, intended to impress visitors and inspire workers, provides fine views of the park, creek, and mountain range to the west. Today, the property is owned by Colorado College, whose historic campus lies to the east; its Facilities Services Department occupies the pottery building. The building has projecting wings at each end of the facade that flank a central area originally planned for an open garden to artistically display pottery and now landscaped with sidewalks, plantings, and paved parking.3A tall red brick wall extends from the northwest corner of the building to the north, enclosing at the northwest corner a small rear courtyard landscaped with grass, bushes, and a pear tree. The college utilizes a large, fenced, asphalt-paved equipment yard with storage sheds north of the building. Across Glen Avenue to the west are a few small dwellings and another maintenance building associated with the college. 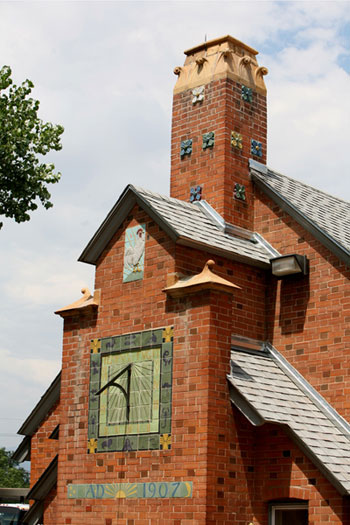 The pottery building originally housed the salesroom, administrative offices, studios, kilns, workshops, and other functional rooms of the manufacturer and was designed to display the wares produced inside. Designed by Dutch architect Nicolaas van den Arend in a picturesque manner displaying Flemish farmhouse and Arts and Crafts influences, the building provides an overall impression of solidity, bright colors, and varied shapes and textures.4 The distinctive building served as an advertisement for the company and its image appeared on its promotional materials and letterhead. The walls are composed of red brick with many blackened headers, laid in Flemish bond with white mortar, and enlivened with thousands of polychrome Van Briggle tiles and terra cotta ornaments placed to display their architectural use in decorative panels, chimney caps, window features, and even a sculptural cat and a gargoyle.5 As the company's engineer noted, 'To break the monotony a great many highly colored matt [sic] glaze tiles are used, ranging from turquoise to green, yellow and plum colors; also glazed terra cotta, as well as the natural colors.'6 Three types of tiles are found on the exterior of the building: 'machine pressed, hand-glazed, single color tiles; hand-pressed and decorated polychrome tiles, in which the glaze is applied onto pressed designs that serve as troughs to contain the different pigments; and the most dramatic of the three--the molded, hand colored three dimensional tiles.'7 Most of the tile installations have designs representing flowers or foliage, but there are also tiles representing people, animals, and objects.8 The slightly projecting, raised foundation is composed of roughly-quarried, randomly-coursed pink rhyolite, and the roof is clad with composition roofing shingles. The roof has multiple gables and dormers with decorative tile faces and tiny shingled dormers. Five projecting square brick chimneys have flower-shaped tile insets and foliate terra cotta caps. Rising above the roof are two massive, bottle-shaped brick kiln smokestacks that have floriate terra cotta ornaments in high relief and tiles featuring the pottery company's logo, a conjoined AA enframed by a square designed by the founders that represents the first letters of their first names. Variations of the conjoined AA design are found on tiles throughout the building. 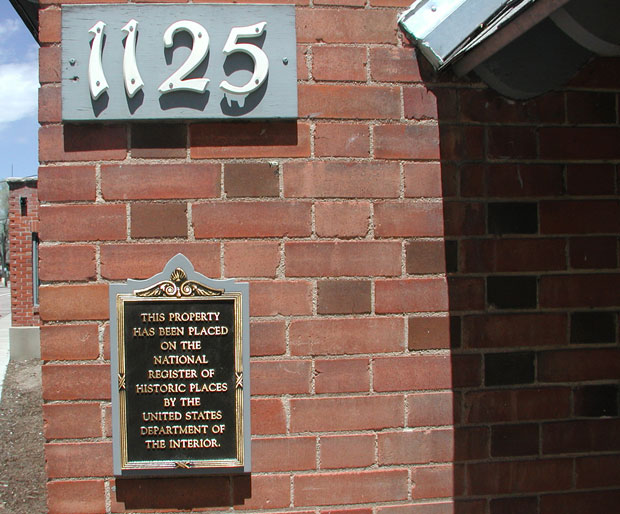 1 The description of ornamental tiles and terra cotta in this narrative makes extensive use of information contained in Molly Wingate and Linda Crissey, The Van Briggle Pottery Building: A Walking Tour (Colorado Springs: Woman's Educational Society, 2008).
2 At some unidentified date after the pottery opened, people also began referring to it as the 'Van Briggle Memorial Pottery' and the 'Van Briggle Memorial Building.'
3 Colorado Springs Gazette, 7 May 1907, 1.
4 Nicolaas is the spelling van den Arend used on official papers and is on his death certificate, although many publications over the years have spelled his name 'Nicholas.'
5 Flemish bond features header and stretcher bricks laid alternately in each course, with each header centered with the stretchers above and below it. N. Frank Frazier, who studied the building's tile, found more than 5,500 tiles, both machine-pressed and handmade using red and white clays.
6 Frank H. Riddle, 'The New Pottery and Art Terra Cotta Plant of the Van Briggle Pottery Company at Colorado Springs, Colo.,' Transactions of the American Ceramic Society 10(1908): 67.
7 Sandra Knauf, "The Van Briggle Connection," Colorado Homes and Lifestyles, March/April 1992, 58.
8 Richard D. Mohr, “Van Briggle Tiles: Their Art, Craft, and Commerce, Part I,” Journal of the American Pottery Association 23(March/April 2007): 21.