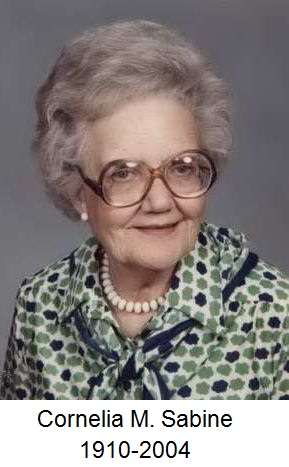 Cornelia Sabine, longtime supporter of Colorado College and the Department of Psychology, died at home in Colorado Springs on August 20, 2004 at the age of 94. Cornelia obtained a B.A. in Psychology from Colorado College in 1949 and an M.A. in Human Behavior in 1950.

Cornelia had a long and distinguished career as a psychologist in Colorado Springs until her retirement in 1993. She was a charter member of the El Paso County Psychological Society, and in 1980 received an award for outstanding contributions to psychology. The award then became an annual award, named in her honor.

Cornelia created the Sabine Endowed Fund for the Colorado College Psychology Department to support many of its projects, equipment, and activities, including two annual academic awards and a speaker series.  For a number of years, she also generously gave her time to meet with psychology classes at CC to share her experiences as an “elder” and as a psychologist. She advised students to use their knowledge of psychology to bring peace and understanding into relationships in our fractious modern world.

We are deeply indebted to Cornelia for her wisdom and generosity. She has enhanced our department and the opportunities for our students. She will never be forgotten.

This is the Department of Psychology