Michelle Gabrieloff-Parish ’00 takes an innovative approach to issues of energy, water, and climate change, looking at all through a social equity lens.

In her role as the energy and climate justice manager for the student-founded Environmental Center at the University of Colorado Boulder, she manages about a dozen programs and 35 of the Environmental Center’s 150-some student staff. One of the biggest of her programs is ECO-Visits, where trained student technicians visit off-campus housing to conduct energy conservation outreach. 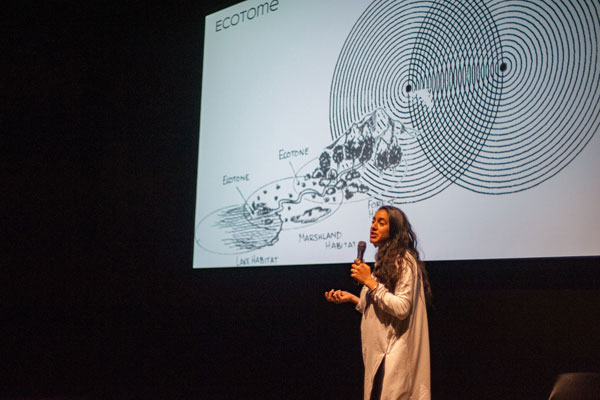 Michelle Gabrieloff-Parish '00 discussing how to bring together diverse interests and communities to become more effective agents of change.

“We give students light bulbs and shower heads and faucet aerators. We insulate their pipes and we make sure that the hot water is set to the proper temperature. We check their fridge and their freezer and we check their toilets for leaks, and we do all of those types of things while talking to them about behavior change and things that they can do beyond the upgrades to live more sustainably and to lower their carbon footprint and take more responsibility for their impact on the planet, but also on people near and far,” Gabrieloff-Parish says.

Diverse groups of student technicians also work in a similar way with low-income community members living in affordable housing through an innovative program called Foundation for Leaders Organizing for Water and Sustainability.

They change light bulbs and check toilets while doing one-on-one training, but they also integrate that with intercultural discussions about diverse sustainable traditions and the leadership of both low-income and communities of color.

Gabrieloff-Parish also founded and leads a semester-long, “Eco-Social Justice Leadership” program. Students who care about social justice and students who care about sustainability and the environment come together to work together, start learning to speak the same language, and see how some of these issues are often not just connected but actually the same issues.

“I actually find it really hard at this point to think of any environmental issues that don’t have a social aspect to them. If you could list off your top environ­mental issues — whether it’s pesticide use, climate change, mining, electronic waste. All those things, not only do they have big impacts on communi­ties, and usually underrepresented communities … but usually those issues stem from already having exploited a community or not taken into account a really holistic view of sustainability,” she says.

Gabrieloff-Parish was raised in a family where environmental and social issues were talked about constantly and often simultaneously.

“My family’s Colombian, and a lot of what was happening when I was growing up with the drug war was violence. But it was also wrapped up in this plant of coca, that the U.S. was so desperate for. And then at the same time, the U.S. was doing things like fumigating the forest in Colombia. And my parents, as people who love being outdoors … to them it was unfathomable that they would be spraying Colombia with these defoliants. In one of the most beautiful, biodiverse countries in the world!”

When Gabrieloff-Parish landed at Colorado College, she got involved in a range of advocacy and activist groups on campus, but it’s her first block that still sticks with her, for good reason. Her professor that block, Devon Peña (now at the University of Wash­ington), took his students to Colorado’s San Luis Valley, his home region. It’s near the Baca campus, in a part of Colorado that used to be Mexico and still has those cultural roots, along with some incredible sustainable practices, including the acequia system. There was illegal, old-growth forest logging happen­ing in the area and the community was organizing against it.

“Some of us got arrested while working with the community members to protest this old-growth logging. I will say I don’t think that was the profes­sor’s intention. … We just went to witness it. I really felt like ‘I can’t watch and not participate. I have to support this community that is facing attacks on all fronts.’” She laughs when adding that her parents said after the fact that they “had a feeling” something like this could happen with her, though perhaps they hadn’t expected it to happen during her first semester. What was happening in San Luis was a perfect example of the blending of social and environmental issues.

She’s still as passionate about speaking out.

“People think of climate justice as being about who gets impacted by climate change. I feel like climate change is actually caused by social injustices, and so climate change is the system’s feedback to us that what we’re doing isn’t working,” she says. “We aren’t going to solve our climate issues if we don’t have everybody on board, which means that we’re going to have to address these equity issues.”