Peering into the deep past of geologic time could help scientists better forecast changes ahead for earth’s troubled future.

Geology Professor Christine Siddoway is committed to helping shed light on those changes, and to bringing along the next generation of scientists. 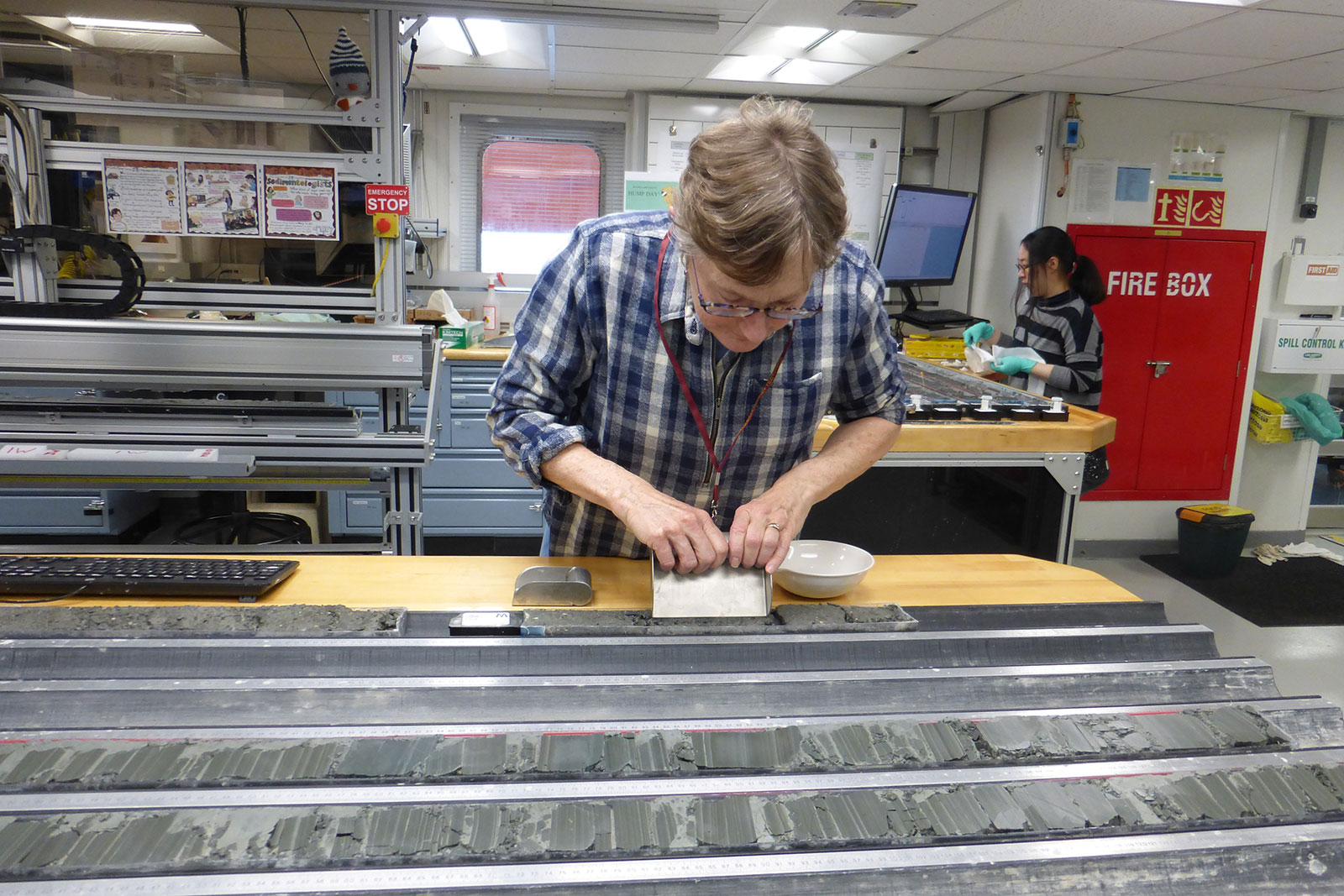 Geology Professor Christine Siddoway working at the core table in the shipboard laboratory of the drillship Joides Resolution.

For three decades, Siddoway has explored the geological evolution of Antarctica using approaches from structural geology and petrology. She has made 14 research trips to Antarctica supported by eight multi-year National Science Foundation awards.

Siddoway participated in the International Ocean Discovery Program (IODP) in Spring 2019, joining an expedition dedicated to obtaining sediment records and data by ship-based drilling in the deep waters of the Amundsen Sea. The expedition scientists will obtain important clues into the geological foundations of West Antarctica, the future of ice sheet change, and the future of climate-human convergence, because the West Antarctic Ice Sheet will play a critical role in future sea level rise.

“This endeavor is much needed, at present, because changes at the poles are of direct consequence for society,” says Siddoway. “Antarctica’s ice is melting at an accelerating rate. As the planet continues to warm, it is ever more critical to predict how its ice sheets will respond.” This requires an understanding of the complex ways in which the ice, ocean, atmosphere, and geology interact with each other.

The funding for Siddoway’s work on Amundsen Sea sediments comes from a National Science Foundation grant of $507,433 awarded to Siddoway and collaborators in July 2019. The funds support project ICI-Hot, which investigates the time of formation of the West Antarctic ice sheet and will extend knowledge of the geological makeup of subglacial bedrock concealed by the ice. CC is the lead institution on this grant, which involves collaborators at the University of Arizona and University of Minnesota.

“If we are successful in establishing the chronology for this pivotal event in the deep past, which has bearing on the past tens of millions of years of Earth’s climate, we will advance new methods that will enhance our ability to forecast ice sheet changes in the future,” Siddoway says of the research.

The 2019 award arrives at a culminating moment for another one of Siddoway’s projects, ROSETTA-Ice, part of NSF’s Antarctic Integrated System Science program. ROSETTA-Ice is a three-year, multi-institutional data acquisition in Antarctica that has assembled an unprecedented view of the Ross Ice Shelf, its structure, and how it has been changing over time. The massive Ross Ice Shelf is a region of floating icesheet that is the size of Spain. Siddoway co-authored the study, “Ross Ice Shelf response to climate driven by the tectonic imprint on seafloor bathymetry" published in 2019 by Nature Geoscience. 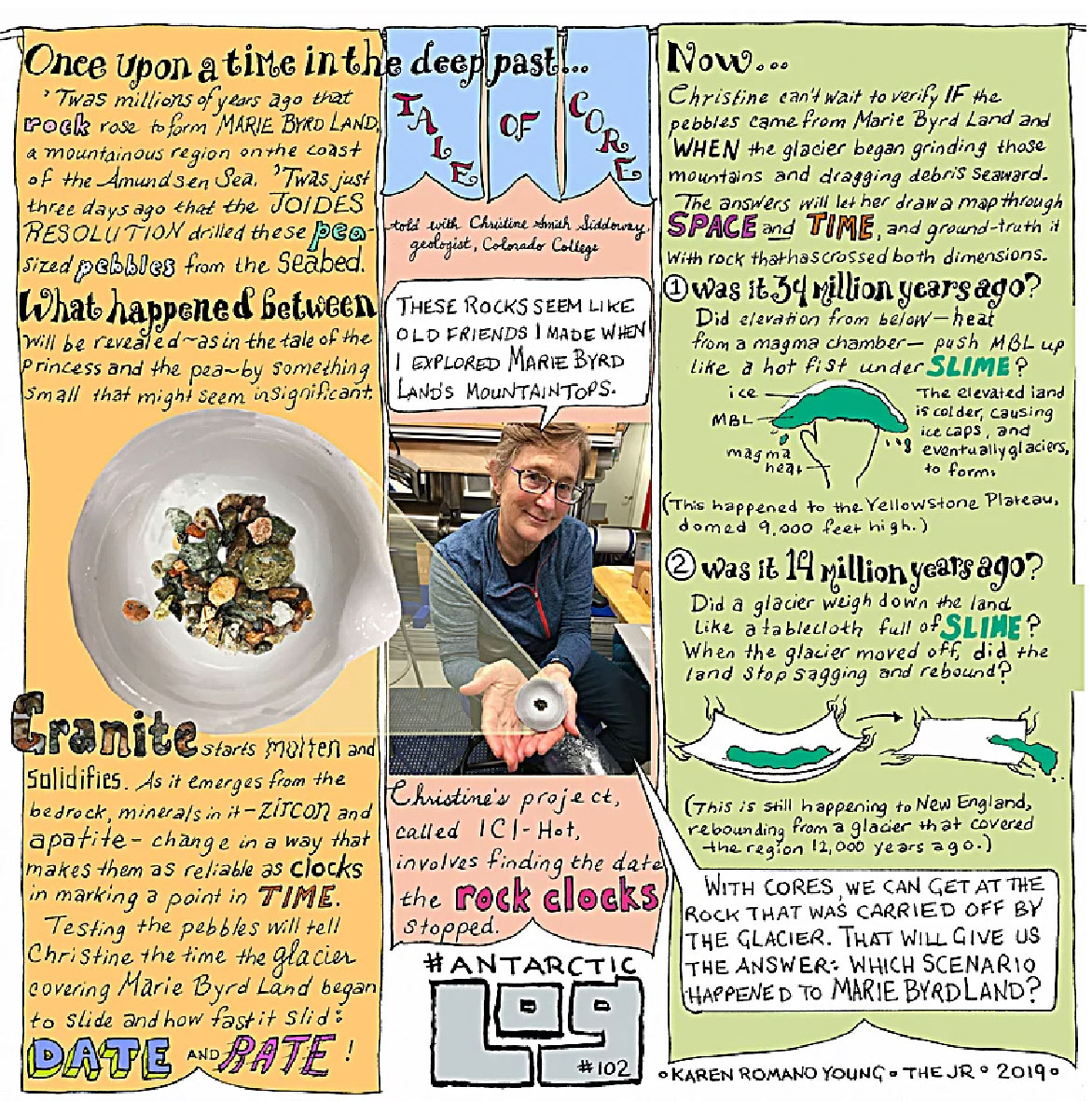 A feature on the ICI-Hot project from AntarcticLOG 2019 , by artist Karen Romano Young, who sailed on IODP379.

The 2019 Nature Geoscience article reports the discovery of an ancient bedrock structure beneath the midline of the Ross Ice Shelf, which influences where a vulnerable part of Antarctica's icesheet melts and where it stays firm and frozen. The structure, an old tectonic boundary, focuses the flow of ocean currents beneath a vast expanse of the ice sheet that is afloat upon ocean water. The finding raises the possibility that local ocean currents may play a crucial role in the Ross Ice Shelf's ultimate retreat, says Siddoway.

But Siddoway is more than a committed research scientist. As a CC professor, she brings along Colorado College students for the academic adventures. She includes material from her Antarctic research in the teaching of both thematic and topical courses, such as the First-Year Experience course In Extinction’s Embrace: Geological Perspectives on Popular Climate Nonfiction. Her funded research projects include investigation opportunities for CC undergraduates.

According to Siddoway, a role for Colorado College students and recent graduates in the ROSETTA-Ice Project was planned into the NSF grant from the outset. Gina Jozef ’18 and Skye Keeshin ’18 used high-resolution ice radar data sets, mapped internal features of the ice sheet, and identified sites of melting from below. Matt Tankersley ’18 used magnetics and gravity data to rigorously test and verify the tectonic boundary interpretation. They were able to leverage these experiences as they secured graduate research positions in top university programs, aiming to continue with polar research. CC graduate Alec Lockett ’17 had responsibility for magnetic measurements during night flights over two of the three seasons of the airborne survey. With these data, the ROSETTA-Ice researchers reconstructed maps of the top and bottom of the ice shelf and of the first-ever seabed bathymetry.

Alec Lockett ’17 (on right) monitoring readings from the magnetometer during an airborne survey for ROSETTA-Ice.

“The data acquisition and our initial publication are only the beginning for ROSETTA-Ice research,” says Siddoway. “Now that the 10 or more data types have been acquired, it’s ‘all hands on deck!’ to put them to use for primary exploration of this vast region of Antarctica that has never before been seen in this detail.”

CC students Sarah Packard ’22 and Jonny Norwine ’22 worked as polar geophysics interns at Columbia University's Lamont-Doherty Earth Observatory in Summer 2019, getting trained in the use of specialized software and instrumentation that are not available at CC, and gaining practical experience with radar and geophysical datasets that are commonly used in industry, academics, and space exploration. Packard also scanned parts of the sediment cores that were drilled during Siddoway’s latest expedition, making her one of the only undergraduate students with access to these materials.

“Who knows? These CC students may in the future apply their new skills to similar datasets obtained for the moon, or Mars — planetary bodies whose geology also needs to be determined using indirect means,” says Siddoway.