Colorado College (CC) Club Sports are supervised by the Recreation program, within the Athletics Department, and offers students the ability to compete in 14 different sports. Each team is registered with local or national league affiliation and while clubs are supervised by the Athletic Department, the day-to-day operations are run by club-nominated student officers. As a recognized Club Sport, these teams are granted the to use the Colorado College name, are afforded a small budget, and can utilize athletic facilities for club events when available.

Colorado College's Club Sports program is a competitive recreational sports program for its students, designed to meet athletic needs not met by existing intramural and intercollegiate programs. Each club is unique in its purpose and operation, but all should reflect positively on both Club Sports as a program and Colorado College as a whole.

Alongside extramural competition and performance, the club sports program places a high degree of emphasis on student initiative, organization, leadership, decision making and team management. Taken as a whole, these program elements allow participants to shape their own experience to a much greater degree than any other athletic program at the college.

Although the structure, organization, and execution of each club sport are primarily the responsibility of students, the Club Sports Program provides four main branches of support: human resources, financial resources, athletic training, and dedicated facilities. 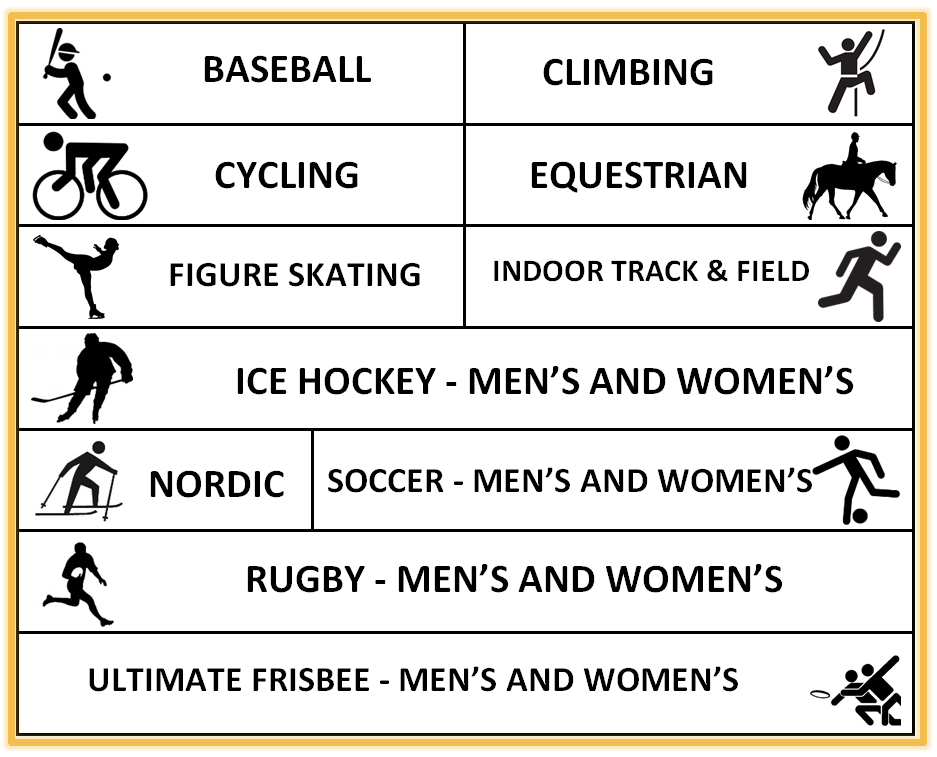 ▪ Equestrian's Anna Lang competed at Nationals at the New York State Fairgrounds.
▪ Women's Rugby (Cutthroat) finished 14th at National Small College Rugby Organization's (NSCRO) Nationals in Pittsburgh, PA.
▪ Both Men's and Women's Ultimate frisbee competed in the Regional tournament in Tulsa, OK.
▪ TMen's Soccer, in their inaugural season, attended Nationals with an Open bid in Foley, Alabama.
▪ Nordic Ski had 4 individuals qualify for Nationals. For the first time in their history, they attended which was a tough feat to do on the Block Plan. They took 6 members (2 non-qualifying members were needed for the relay) to Nationals in Jackson Hole, WY.
▪ In Climbing's inaugural season, they had seven members qualify for Nationals in Nashville, TN. For the five that attended,  Rin Gentry finished 4th of 106  in female sport climbing, Claire Bresnan finished 14th of 155 in female bouldering, Zachary Levy finished 32nd of 222 in male bouldering, Emily Barga finished 55th of 155 in female bouldering, and Adriana Aboitiz finished 69th of 155 in female bouldering. The team overall placed 18th of 94 teams.

▪ The program recognized Climbing and Men's Soccer as new clubs within the program.
▪ Hayley Bates represented CC at Mountian Biking Nationals in Missoula, Mt and Road Bike Nationals in Grand Junction, CO.
▪ Nordic Ski had five individuals qualify for Nationals.
▪ Women's Rugby attended NSCRO Nationals in Pittsburgh, PA.
Women's Rugby member, Nora Holmes, was named an NSCRO All-American.
▪ Climbing sent seven representatives to Nationals in Houston, TX.
▪ In response to a student-written letter to the President of the college asking for more recognition for the program, Autrey Field was resurfaced.

▪ The program introduced a designated Club Sports Athletic Trainer to the staff.
▪ Cycling had two qualifiers for Road Nationals hosted in Grand Junction, CO.
Where Hayley Bates made it to the podium with a fifth-place finish.
▪Nordic Ski had four individuals qualify for Nationals.
▪ Women's Rugby took 4th at NSCRO Nationals in Pittsburgh, PA.
▪ Men's Ultimate Frisbee attended the National Tournament in Lexington, KY.
▪ Women's Ultimate finished 3rd in the South Central Regional.