The Phi Beta Kappa Society was established in 1776 by ten students at the College of William & Mary College to carry on debate and oratory, possibly concerning the revolutionary movements of their time. The first academic society to adopt a Greek name and motto (Philosophia Biou Kubernetes or “Love of learning is the guide of life”), Phi Beta Kappa developed into the most prestigious undergraduate honors society in the United States.

Permission to charter a chapter is given only to colleges and universities that embrace the goals of the Society: a commitment to broad liberal learning in the arts and sciences; support for tolerance and for freedom of inquiry and expression; and an embrace of creativity and scholarly excellence. Chartered in 1904, Colorado College’s Beta Chapter is one of only four ΦBK chapters in Colorado and 276 nationwide. 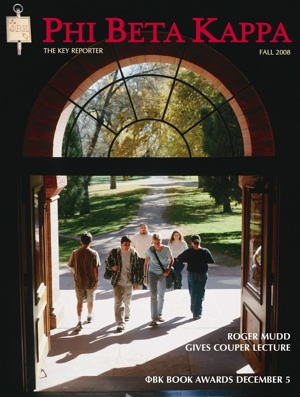 Each year across the country, faculty and staff members of local Phi Beta Kappa chapters review the scholarly and civic records of juniors and seniors, considering those students for possible membership in the Society. In general, less than 10% of any class of students is eligible for membership. At Colorado College, the ΦBK members of the faculty poll all of their colleagues each year, asking them to identify the students with the strongest academic records. In addition to considering that ranking, the members review transcripts and conduct other inquiries, selecting for election only those students with exemplary records of academic and civic achievement, including breadth of inquiry in the humanities, natural sciences, and social sciences. For a list of the specific requirements (called "stipulations") for membership in Phi Beta Kappa, click on "Membership Requirements."

Election to membership in Phi Beta Kappa is a mark of distinction, and a sign of the respect that the College’s ΦBK faculty and staff have for those students chosen. Each student inducted into the Society receives a lifetime membership in the national Phi Beta Kappa Society and the local Beta Chapter.

Perhaps more importantly, membership in ΦBK connects individuals with strong interests in scholarly and creative endeavors. Many associations, including the Alpha Association of Colorado, fund scholarships to help Colorado members defray the expenses of advanced graduate studies. In addition, local and regional chapters work with the national Society to promote friendship and lifelong learning through social, cultural and educational programs, as well as via community service projects. The Beta Chapter, for example, sponsors talks and workshops at Colorado College designed to promote scholarly reflection and critical thinking. The Alpha Association in Denver sponsors talks, dinners, museum tours, theatre trips, and the like. Students elected to the Beta Chapter have access to similar kinds of regional associations in many parts of the country after graduation.

Palmer Hall on the cover of The Key Reporter (2008)