While the Rockies Project has traditionally focused on specific issues for the term of one year, from the summer of 2011 through the Spring of 2013 we extended our focus on one of the Rocky Mountain West's major issues for two years: The Colorado River Basin. Our research and outreach during 2011-12 focused on the history and current state of the Southwest's iconic river with a Project title of: The Colorado River Basin: Agenda for Use, Restoration, and Sustainability for the Next Generation. Following on the successes of our first year of focus on the Colorado River, we chose to keep our focus on the crucial issues of water in the river basin. Utilizing the results of the Bureau of Reclamation's Colorado River Basin Supply and Demand Study, we researched the future of water use in the Southwest. Through the continuation of our tradition of student-faculty collaborative research and our on-the-ground approach to investigating the crucial issues of the Rocky Mountain West, we titled our 2012-13 Project: Water Friendly Futures for the Colorado River Basin.

In addition to employing our traditional approach to researching the Project's focus, we also incorporated a field expedition component to the Project that helped to bring light to the many contentious issues of the basin through photo, video, and social media. In the fall and winter of 2011 and 2012, two of our field researchers paddled from the headwaters of the Green River in Wyoming to the dry Colorado River Delta in Mexico for our Source to Sea Expedition. Another journey during the summer of 2012, led our Down the Colorado Expedition from the headwaters of the Colorado River in Rocky Mountain National Park to Lake Powell, successfully paddling the two major branches of the river basin. Both expeditions were major successes in highlighting the important issues of water in the Southwest and the state of the river that supplies more than 30 million people with water.

The information below covers much our focus on the Colorado River Basin from 2011 to 2013.

The Colorado River Basin, one of the world’s major fresh-water sources, encompasses portions of seven states in the American Southwest and continues into Mexico: consisting of 242,000 sq. miles in the US, of which three-fourths is public lands, and 3,000 in Mexico; supplying water to households, communities, businesses, and farms, as well as natural ecosystems. Roughly 27 million people rely on the river for water, energy, and healthy ecosystems. Climate studies indicate the potential for inadequate water supplies throughout the 1,400-mile river system. The region’s projected population growth means increased water demand on the Colorado River from municipalities, industry, agriculture, and recreation. Some expert studies predict that by 2050 the river system will not be able to supply all of its allocated shares two-thirds to nine-tenths of the time.

It was with the acknowledgement of these mounting pressures on the already stressed river system that during summer 2011 and the 2011-12 academic year the Rockies Project focused all of its efforts on a single topic:

The Colorado River Basin: Agenda for Use, Restoration,
and Sustainability for the Next Generation 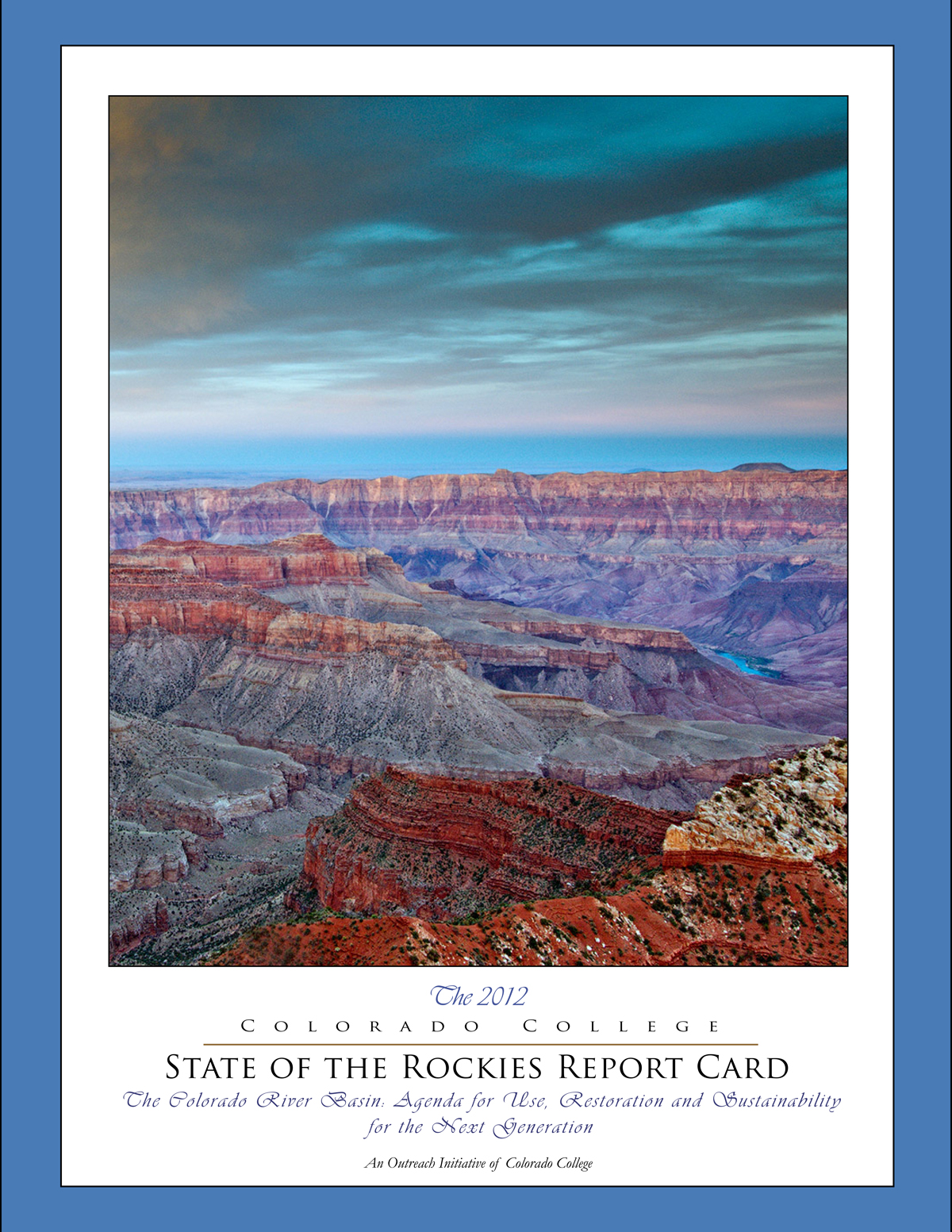 Summer research by five students covered key aspects of the Basin that developed into sections of the 2012 Report Card:

Additionally, six monthly sessions brought to campus experts on these and other aspects of the Basin to promote public dialogue.  The April 9-10, 2012 Rockies Conference culminated our first year of effort on the Basin by unveiling the 2012 Colorado College State of the Rockies Report Card containing the student-authored sections on summer research.  Experts at the conference reflected on key management issues in the Basin.

Building upon this initial year of investment in studying the complex issues of the Colorado River Basin, during 2012-13 we will carry our student work forward by focusing our efforts on a related key theme:

This effort will start with individual student researchers carrying out summer 2012 investigations, supplemented by an extended field research trip in the Basin.  As in the past, these student topics will evolve into sections for the 2013 Rockies Report Card.  The specific topics of this research include water-friendly energy options, agriculture in an age of conservation, and dramatically changing human settlement patterns in and dependent upon the Basin's water.

This year's Rockies project, developing on our successes over the past ten years, and in particular last year's Project on the Colorado River Basin, will be incorporating new and traditional aspects of the Project including:

Check out our 2012 summer field work that included a trip to a gas rig in Parachute, Colo., peach orchards in Palisade, Colo., and a week-long trip through Cataract Canyon in Utah with our Down the Colorado Expedition. 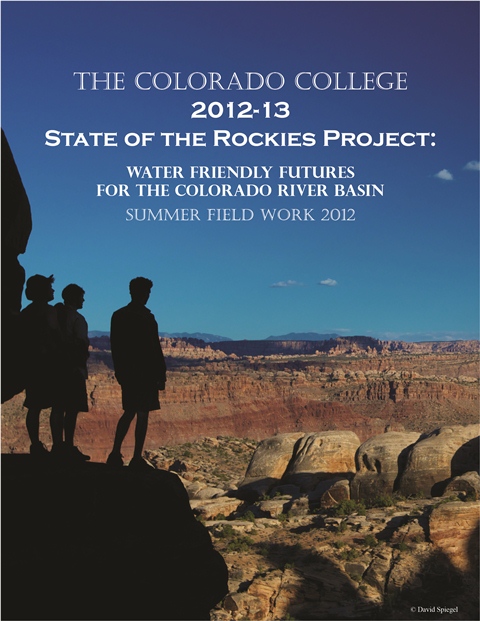 Managing the Colorado River Basin:
An Assessment of What Two Generations Believe
About the Future of Water in the Southwest 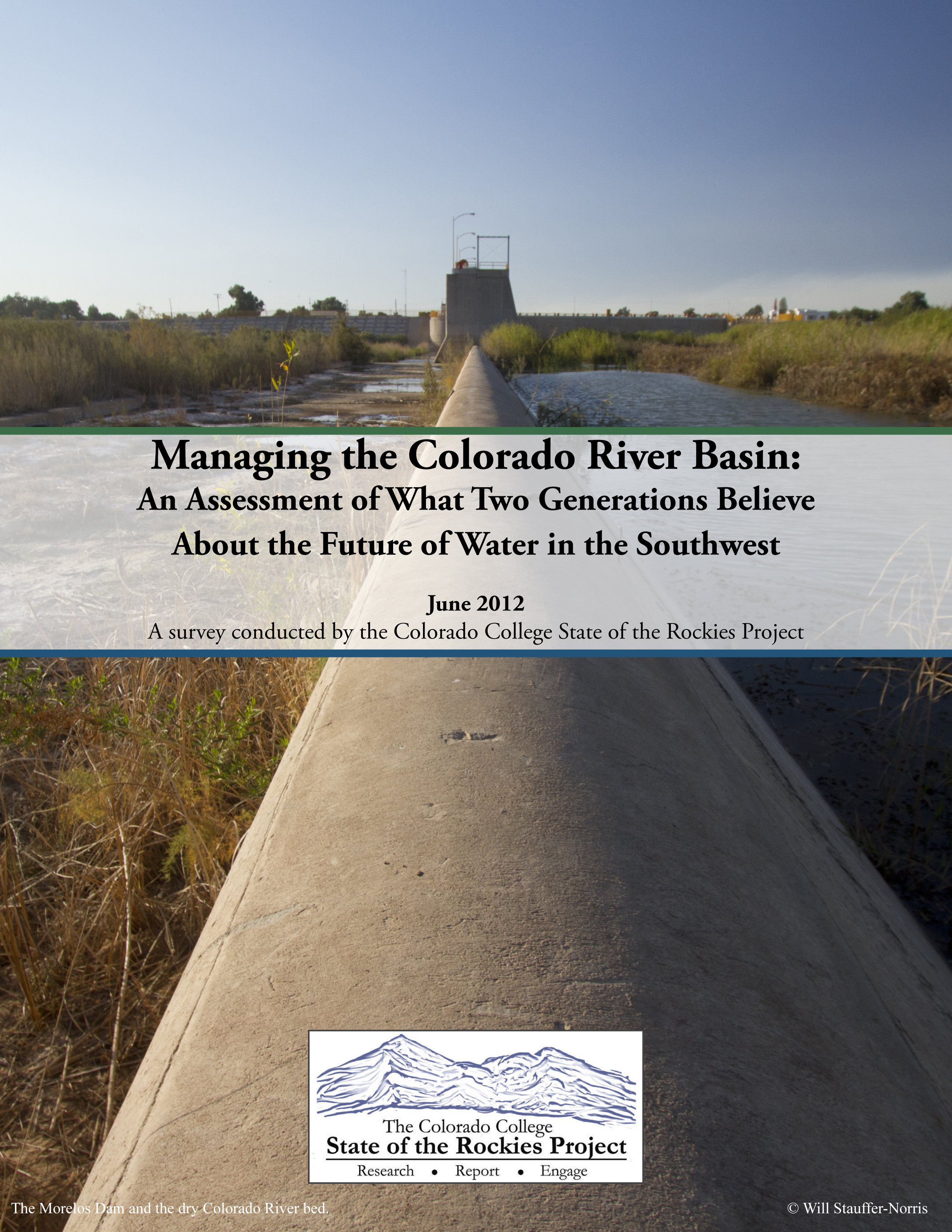 Overview of the Colorado River Basin