Monument Creek, running along the western boundary of the CC campus, is one of the major tributaries to Fountain Creek, draining 235 of the 926 square miles in the Fountain Creek Watershed.1 Fountain Creek Watershed drains from the top of Pikes Peak into the Arkansas River in Pueblo, as seen in Figure 1.2 This water will eventually meet its confluence with the Mississippi River and flow into the Gulf of Mexico. 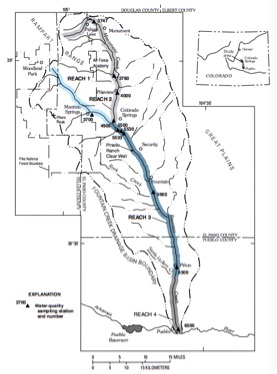 Figure 1) This map shows the extent of the Fountain Creek Watershed (Bossong 2001.)

The Fountain Creek Watershed runs through El Paso, Teller, and Pueblo counties where it is used for drinking water, agriculture, and recreation.3 About 25 percent of Colorado Springs’ drinking water is derived from local sources. Water is diverted from local surface water sources including the north and south slopes of Pikes Peak, North and South Cheyenne Creek, Monument Creek, the Northfield Watershed, and Fountain Creek. Some water is also pumped from deep wells drilled into the Denver and Arapahoe Aquifers. Although this water is local, it would not normally be hydraulically connected with surface water in the watershed because of its depth.4

The additional 75 percent of drinking water is pumped about 200 miles from the headwaters of the upper Arkansas River and across the Continental Divide from the headwaters of the Colorado River Basin. This water comes from mountain streams near Aspen, Leadville, and Breckenridge and is stored in reservoirs along the Continental Divide. Water then travels through pipelines to Catamount and Rampart Reservoirs where it is held locally before reaching Colorado Springs.4

Fountain Creek has undergone many changes due to human impacts. An increasing population in the watershed has put additional stress on it by necessitating the importation of water from outside the watershed. Excess water pumped in from external sources is released to Fountain Creek after treatment.5 The additional water source allows Fountain Creek to sustain flow throughout the entire year and improves wetland and riparian habitats. However, the addition of ‘non-native’ water also increases the flow. Urbanization has increased the percent area of impervious surfaces because water is unable to penetrate the ground where buildings, roads, and parking lots are built. This has resulted in faster and more voluminous storm runoff to rivers.7 Storm runoff and discharged non-native water have increased the mean annual flow of Fountain Creek by 30 percent to 200 percent, depending on the section.6 As a result, the erosional factor of Fountain Creek downstream of Colorado Springs has increased 4 or 5 times.6

Despite changes to the stream morphology, the Fountain Creek Watershed is home to many healthy streams and scenic riparian habitats. Colorado Springs offers a vast network of trail systems to explore, learn about, and get to know our local environment and watershed.