Research conducted on a volcano in New Zealand by Aaron Farquhar ’18 and Robin Hilderman ’20 has been published in the journal Geosciences.

The article, “Pressure Controlled Permeability in a Conduit Filled with Fractured Hydrothermal Breccia Reconstructed from Ballistics from Whakaari [White Island], New Zealand,” has been published as part of the Special Issue Exploring and Modeling the Magma-Hydrothermal Regime. 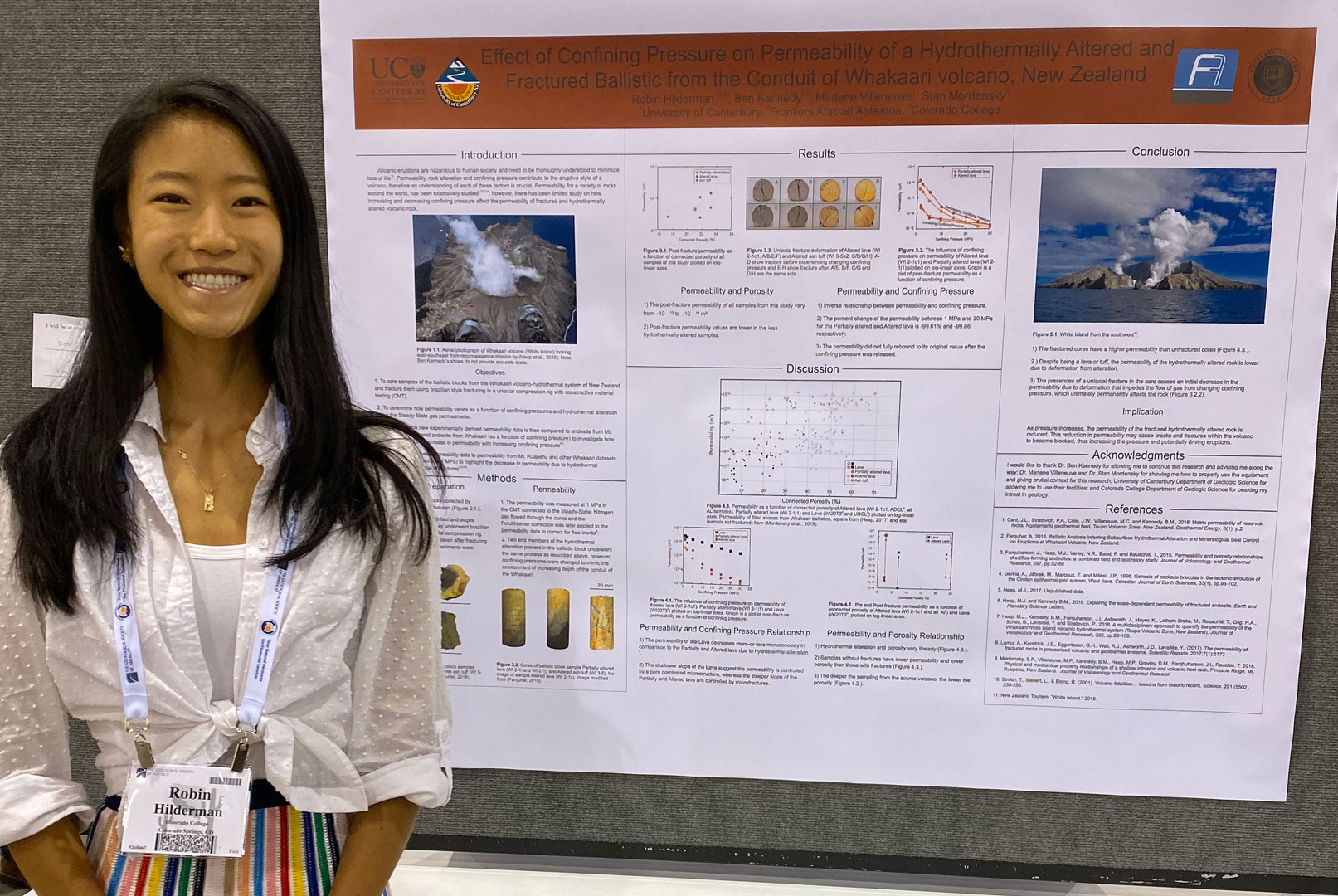 Whakaari/White Island is New Zealand’s most active volcano, located approximately 30 miles off the northeast coast of the North Island in the Bay of Plenty, which erupted in November 2019, killing more than 20 people. Research highlights the need for a better understanding of the controls on phreatic, or steam-blast, eruptions. The project spanned four years; Farquhar began research there in 2016 and Hilderman in 2018.

“The work began as trying to understand a handful of funny-looking yellow rocks we collected from the weirdest landscape I’ve ever seen in my life,” says Farquhar. “In the beginning I had no idea how well I’d get to know these samples. I cut, crushed, ground, submerged, cored, measured, pressurized, shot gases through, shot lasers at, and posted selfies with these rocks. As I collected data for the study abroad project, and then my thesis and the publication, a picture began to form of where these erupted ballistics had come from inside the volcano. It became clearer how they had gained their properties and bizarre appearance.”

When continuing Farquhar’s research on Whakaari was posed as a potential research topic during the study abroad program, Hilderman immediately was intrigued by the idea of studying a volcano that is also an active hydrothermal system.

“I initially felt like a fish out of water, working with samples in a rock mechanic lab, and doing analyses and calculations I had never even heard of before,” she says. “Upon finishing the intended analyses, we found an unusual trend in permeability and decided to test whether the level of hydrothermal alteration could affect the permeability from multiple cycles of increasing, followed by decreasing confining pressure. The subsequent analyses made it clear that we were studying the properties of a volcano that affect the nature of an eruption and how important they are, especially following the devastating eruption in December of 2019.”

Their article notes that breccia-filled eruption conduits are dynamic systems where pressures frequently exceed critical thresholds, generating earthquakes and transmitting fluids. To assess the dynamics of breccia-filled conduits, the researchers examined lava, ash tuff, and hydrothermal breccia ballistics with varying alteration, veining, fractures, and brecciation ejected during the April 27, 2016, eruption of Whakaari/White Island. The research used findings from these samples to model a dynamic interplay between pressure, the ability for the volcano to degas, and mineralization.

When Hilderman returned to Colorado College, her adviser, Professor of Geology Jeff Noblett, suggested she present the continued work at the 2019 Annual GSA Meeting in Arizona in 2019, which she did. See more photos here.