Because of all the excitement over butterfly ballots and recounting votes in Florida, there was very little deep political analysis of the 2000 presidential election. Reporters and commentators who should have been busy dissecting the election for us were called away to more mundane duties, such as explaining the difference between a hanging chad (one corner attached) and a pregnant chad (punched but still firmly attached). 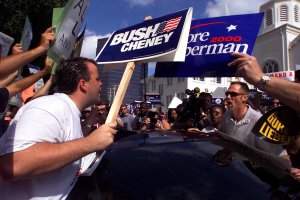 In an effort to correct this oversight, here are some points you might not have considered in the recent electoral fracas in which Republican George W. Bush defeated Democrat Albert Gore by a 5-to-4 vote of the U.S. Supreme Court.

Bush carried almost everything else, creating an L-shaped block of Republican states extending from Idaho and the Dakotas south to Arizona and Texas and then eastward clear across the old South. The only Democratic intrusion into this Republican “L” was New Mexico, which went for Gore by the same whisker-thin margin that characterized so many of the statewide results in this particular election.

Goodbye to the Solid South. The words have been a part of every American Government class I have ever taught. “No Democrat has ever been elected President of the United States without carrying the South.” The solid Democratic South was one of the great staples - one of the unchanging electoral principles -- of United States presidential elections. But in the year 2000, George W. Bush carried every last Southern state, including the four that Bill Clinton and Al Gore won for the Democrats in 1992 --Louisiana, Arkansas, Tennessee, and Georgia.

The change of the South from Democratic to Republican had been anticipated and was a long time coming, but the year 2000 election finished off the idea of a “Solid Democratic South” once and for all.

How about this for a revised version? “No Democrat has ever been elected president without carrying at least one state of the South.” In what must be one of the great ironies of American presidential politics, Al Gore would have won the White House if he had carried just one Southern state. His own home state of Tennessee, or Bill Clinton’s home state of Arkansas, would have done the job.

If the Republicans are going to make a habit of carrying every one of the Southern states in future presidential elections, the Democrats are in for a rough road in their efforts to regain the White House. The South is just too important a section of the nation for the Democrats to cede it completely to the Republicans.

Bellwether Ohio. In the early 20th century, the state of Ohio was regarded as the great swing state of American presidential politics. Political analysts waxed enthusiastic as they pointed out that Ohio is “midway between East and West, balanced between North and South.”

So it was pleasantly historic that in the year 2000, in one of the closest elections in United States history, Ohio preserved its bellwether status by voting narrowly for the eventual national winner -- George W. Bush. If Ohio had narrowly gone in the other direction and voted for Al Gore, the Democrats would not have needed Florida to gain the White House. And Ohio would still have voted with the winner.

Everyone at Colorado College knows whereof I speak. Early public opinion polls put Colorado’s eight electoral votes firmly in the George W. Bush camp. As a result, neither Bush nor Al Gore ever campaigned even one day in Colorado between the national conventions in August and the general election in November. There were no television advertisements in Colorado for the presidential candidates, and precious few lawn signs or automobile bumper stickers.

Contrast that with Florida, or Michigan, or Wisconsin, or any other of the limited number of states where public opinion polls showed the race to be close. Those states were bombarded with multiple candidate visits and endless television commercials touting the two candidates. Hey, you may not like political television commercials, but if you’re not watching a lot of them, you don’t have an election going on.

So to establish fairness from one state to another, I strongly support abolishing the Electoral College and replacing it with popular direct election of the president. That will encourage candidates to buy national advertising aimed at every voter in every state. It will also encourage candidates to get around the country more, tempting them to show up in any city, suburb, or country town where polls show there is a sizeable group of undecided voters.

A National Presidential Election Administration. What should we do about what happened in Florida? The American presidency is much too important an office to leave the election to bumbling state and local officials who have neither the political will nor the financial resources to adopt efficient and honest election procedures. I favor creating a national Presidential Election Administration, a U.S. government agency based in Washington, D.C., that will adopt standardized presidential election procedures and implement them throughout the country. Such an agency would operate presidential elections in every locality of the United States, just as the Social Security Administration provides Social Security services in every city and town.

As for the individual states, they can hitchhike on the U.S. system, electing their state and local candidates on an election day administered by the U.S. government. Those states that do not want to use the U.S. government election day procedures, perhaps fearing federal control, could adopt their own rules and procedures and conduct state and local elections anyway they see fit.

Professor Bob Loevy had a lot to say about this year’s unusual presidential election. He was quoted in The Wall Street Journal, Palm Beach Post, Denver Post, Boston Herald, Los Angeles Times, Dallas Morning News, and Fox News Online, among many others.

At CC since 1968, Loevy has written two books on the presidential selection process: The Flawed Path to the Presidency 1992 and The Manipulated Path to the White House 1996. One of the chief architects of the Colorado primary first held in 1992, Loevy was a campaign aide to Spiro Agnew when the former U.S. vice president ran for governor in Maryland, and to former U.S. Senator Thomas Kuchel.  Loevy also wrote Colorado College: A Place of Learning, 1874–1999, available through the CC bookstore, 1-800- 854-3930.