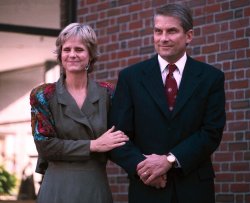 William “Bro” Adams ’72 and his wife, Cathy Bruce, are pictured here at Colby College’s inauguration weekend. In a ceremony that incorporated academic traditions dating to medieval times and the college’s first live video Web cast, Colby inaugurated Adams as its 19th president on Oct. 21. Only the third inauguration at Colby since World War II, the event blended a sense of historical gravity, an air of celebration, and a focus on the future. The formal installation ceremony featured warm welcomes from Maine’s U.S. Sen. Olympia Snowe and Congressman Tom Allen among others, and it featured Colby faculty plus representatives of four dozen other colleges and universities in full academic regalia.

Adams came to Colby after a successful tenure as president of Bucknell University in Pennsylvania. Prior to running Bucknell he taught political philosophy at the university level, ran the Great Works in Western Culture program at Stanford University, and was vice president and secretary of Wesleyan University in Connecticut.